First Annual Mix It Up at Lunch Day 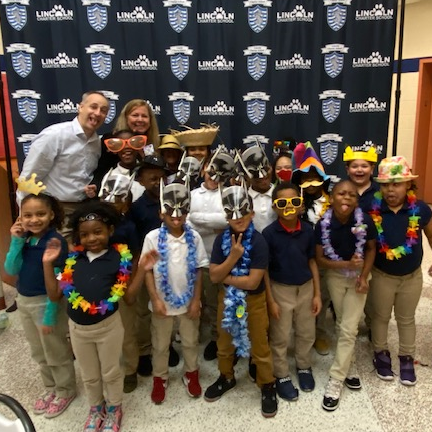 Whitsons School Nutrition partnered with Lincoln Charter School in York, PA, to participate in Mix It Up at Lunch Day on February 7, 2020. Lincoln Charter School students are now among over one million other students across the country and around the world to help break down social and racial barriers by participating in the First Annual Mix It Up at Lunch Day.

The event was brought to the school and implemented by Kelly Friend, COO and John Koutras, District Manager, of Whitsons School Nutrition. According to our team, it was a huge success.

“We were thrilled to see so many children actively participating and excited to be a part of the event. The interaction was sensational, and the experience brought such positive energy to the environment,” said Friend.

“We added some additional entertainment with a photo booth where the students could express their personalities with fun props. This helped facilitate a connection among students who participated, many who they had never spoken to before. The schools created large posters for the students to color together, giving them another opportunity for them to engage with each other,” said Koutras.

The Southern Poverty Law Center established Teaching Tolerance in 1991 to provide educators with free resources designed to reduce prejudice, improve intergroup relations and support equitable school experiences for the nation’s children. The Mix It Up event was originated through the Teaching Tolerance Project in 2002, encouraging students to sit with someone new in the cafeteria for one day, and then to incorporate the day into yearlong efforts to promote a healthy school climate. School cafeterias are the focus of Mix It Up because that’s where schools’ social boundaries are most obvious.

“Mix It Up is a positive step that schools can take to help create learning environments where students see each other as individuals and not just as members of a separate group,” said Teaching Tolerance Director Maureen Costello. “When people step out of their cliques and get to know someone, they realize just how much they have in common.”

The Mix It Up initiative is in alignment with Whitsons’ mission of Enhancing Life One Meal at a Time™. Whitsons plans to expand the program to other school districts that are interested in partnering on this important program, knowing that positive interactions that start in the school cafeteria can lead to greater diversity and inclusion throughout the school district.