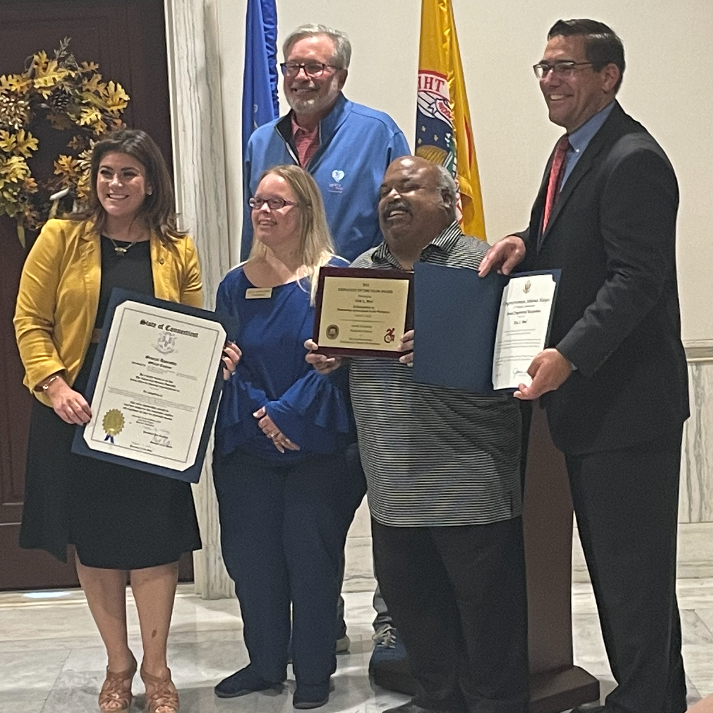 Congratulations to Erik Bird from the Whitsons team at the Consolidated School District of New Britain, CT on receiving the honorable Commission with Disabilities Award this past fall.

In recognition of the achievement, the Commission for Individuals with Disabilities hosts an awards event at City Hall, which is attended by New Britain Mayor, Erin Stewart, Connecticut State Representative – 22nd General Assembly District, Dr. William Petit, and various State Senators. A few months prior to the event, Whitsons Resident District Manager Jeff Taddeo received a letter from June O’Leary, Disabilities Service Advocate, asking if he had an individual with disabilities that he would like to nominate for his outstanding work. Instantly, Erik came to mind. According to Taddeo, he approaches each day with positivity and a very contagious smile.

“Today may go down as one of the most touching moments I have experienced in New Britain,” says Taddeo. “I had nominated Erik Bird for the award of outstanding employee with disabilities, and we were fortunate enough to have Erik win the award. His speech brought me to tears. He is an amazing individual who helps us all to learn to focus on the ability and not the disability of any individual who struggles.”

It has been a tremendous year for Erik, as he was also inducted into the New Britain Sports Hall of Fame for his volunteer service of over 20 years. He was also awarded a Whitsons Silver Apple Award and presented with $100 gift card in recognition of what he does for the students of New Britain every single day. We are truly proud and inspired by you, Erik!